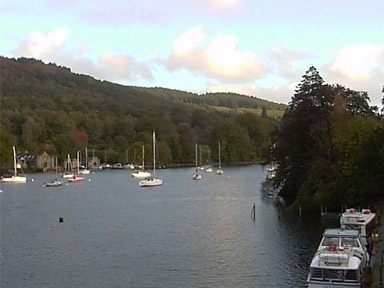 More about this webcam location:

The staggering beauty of Lake Windermere and the surrounding area is captured by this Panasonic IP camera. Lake Windermere is the largest natural lake in England at 11 miles (18.08km) long, nearly one mile wide (1.49km) and 220ft deep (67m). It's fed by numerous rivers and drained from its southernmost point by the River Leven.

The lake contains 18 islands, the largest is the privately owned Belle Isle (40 acres) lying opposite Bowness and around a kilometre in length.

Lake Windermere has been a major attraction for visitors since Victorian times when the Kendal and Windermere Railway built a branch line to it. One of the views from the webcam is of Lakeside Station where you might catch sight of one of the steam locomotives.

The railway connects with Windermere Lake Cruises which operates a passenger service the length of the lake. These services date back to the former Furness Railway, who built the Lakeside branch. Since privatisation, three of the old railway boats are still in service today.

The MV Tern is the oldest of the steam boats. Originally commissioned in 1891, the Tern was requisitioned during WW2 as a patrol boat on the lake, and used as a base for testing underwater mine laying techniques. The original steam engines have been replaced by diesel engines, and the Tern is still in full working order.

Back to Live Streams
See Live Video from this Webcam